Sometimes you need a nose job to make breathing easier. That’s why Christian ended up having rhinoplasty. Orlando plastic surgeon Dr. Gross specializes in functional rhinoplasty, and that’s what led Christian to him. Christian suffered an injury to his nose playing football that made it difficult to breathe, even after the initial injury healed. Now, Christian can breathe easily, and he likes the improved look of his nose. 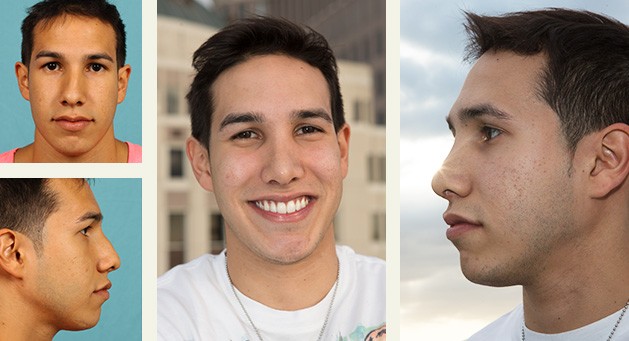 Why did you choose Dr. Gross?

I found Dr. Gross in a specific way. I was doing a lot of research on the Internet, and I was focusing on a particular doctor that would assure me through my research and testimonials and other people's experiences. I wanted to find a doctor that would accommodate my needs and would perform a great procedure. There are a lot of doctors to choose from, especially with such a delicate procedure like this. So I wanted to make sure I did all the research I could ... to make sure that I was going to find the correct doctor. And at the end of my research it just led me to Dr. Gross. I went through his website, I saw a few video testimonials, and I saw a few written letters. I have a lot of great reviews from forums and outside sources, not only on his website, but on other people's reviews on personal experiences. So I did my due diligence on looking for my doctor ...

What's it like to get rhinoplasty after a sports injury?

The reason I went to go see Dr. Gross in the first place is because I suffered an injury when playing a physical sport. I was playing football and I felt a serious trauma to the nose, and I didn't want a cosmetic procedure done necessarily. What I wanted was to improve my breathing because I was suffering through a lot of discomfort. I mean, I'm still physically active, so every time I would play a sport, I would cramp up easily just because I would not be able to breathe. The most proper way to breathe is through the nose and I would try and try, but I had such a small passageway. I had a restricted air flow that I just couldn't operate. You know what I mean, I would get tired, I would fatigue easily. I realized that it was becoming a problem through my sleep as well. So I'm snoring or always waking congested - it's just very uncomfortable. And I went to the doctor and I told him I didn't want - I didn't want to basically have a surgery and then look like I had surgery. I wanted to go there, fix my breathing, improve my nose - it was crooked, so I wanted to make it straight again - improve my breathing and just make it seem as if nothing ever happened and no one realized I underwent a process. That was the main concern.

What was your first impression of Dr. Gross?

So what's interesting with Dr. Gross is that, when you go sit down for your consultation, he sits you down in this room and he has a big-screen TV that you can look at, and he literally goes through the procedure like what he is going to do as far as reshaping the cosmetic features. Internally, he just explains on the outside how it's going to look. He goes ahead and shows you the difference before and after. You get to be creative, like artwork, and you create it with him. And he is there to share his opinion, what he would think, and at the end of the day you have to say, "OK, that's what I would want, that's how I see it." And we want to put something with a real natural look, and that was my main concern, and he molded it out right before my eyes, my natural look, and I was just like, you know what, that made it that much more like reassuring and I felt that much more secure, I went through with the procedure.

It's a funny topic because I'm terrified of surgery. I never went through surgery in my life. I've never been under the blade or under anesthesia or anything of that nature. As a matter of fact, I have stayed away from fixing my nose because I was so scared to go through the procedure. I couldn't stand not breathing, so I went to go see Dr. Gross. So on the day of procedure, I was ... terrified and immediately the staff tried to accommodate me. They calmed me down, they did a great job, but I was scared. Dr. Gross explains what he is going to do and how he is going to be there with me, "Everything is going to be OK." So I'm like OK, I have the experienced people around me to support, but I'm just not like - I don't know what's going to happen and I don't know what was true. I don't know what's going to happen afterwards either. And then the doctor comes into the room while I'm sitting there already dressed for surgery, and he comes and he sits there and he explains to me what he is going to do, exactly what he is going to do. I still remember telling the doctor, "You know what, honestly, just you coming in here and just like before I go in and you explained me this, like you just make - it just makes me happy." I was good to go.

All right, after surgery, well, let me put it like this. It is one of the biggest procedures. I mean it is - rhinoplasty is a very delicate procedure. It does have swelling, it does have a lot of swelling involved, blood, but it is so overrated, or maybe just because of my doctor. I mean...think about it: I had surgery on Sept. 18 and today is Nov. 7 of 2013. So I'm less than 2 months, and this is me right now. I mean one week after surgery I got my cast off. I immediately saw the difference and my best friend was sitting there next to me. He was like wow, it looks normal.

Well, I thought it was not meant to be a cosmetic procedure. It was mostly focused on my breathing and my well-being - things of that note. At the end of the day, it did affect me cosmetically as well because of the confidence that it created. My nose was crooked. It didn't affect me to the degree that I couldn't have lived with it, but it was enlarged because of the injury, it was wider, it was slanted and it was - it changed the profile of my face. Now it's like the accident never happened. So I go back and I felt that difference again. I saw the difference, I mean most of my friends - they made it look so natural that they don't say, "Oh, did you get a nose job?" It's just - it doesn't look feminine. He it kept it very natural. So my initial response when I saw myself (was) it looked so sweet! It looked so natural and it looked so - better than what I used to. I mean you'll see the before-and-after versions, I mean there was a significant difference, so I mean kudos to Dr. Gross.