For years, Shaunessy lived with a nose she didn’t like. A rugby injury in college left her with a bridge deformity and breathing issues that bothered her constantly. So as she approached 40, she decided it was time to make a change. She Googled “best rhinoplasty surgeons in Orlando” and one name came up over and over again: Dr. Edward Gross. She scheduled her consultation, sat down for a computer imaging session, and moved forward with an exciting process that ultimately resulted in an outcome that exceeded her expectations. 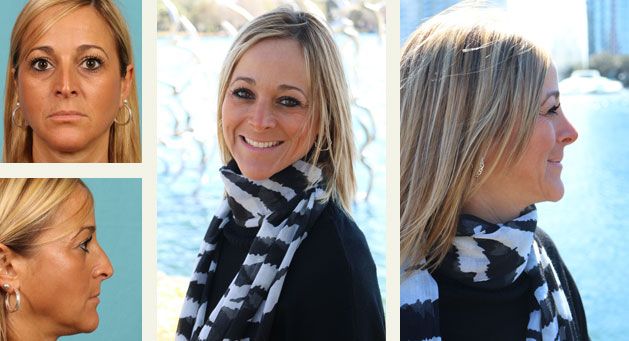 Shaunessy: Why did you want rhinoplasty?

I chose to get rhinoplasty after many years of feeling insecure about the way my nose looked. I had a few genetic flaws and a pronounced bump on my nose from a sports injury in college, and it really changed the way I looked, and I wasn't happy with it. I would always turn my head so people couldn't see my profile – stuff like that. It made me feel very, very uncomfortable. And as I got older, I wanted to do something for myself. I just turned 40 this year. I wanted to go and have a procedure done that was going to change how I felt. And I went to, I believe, the best surgeon around.

Dr. Gross: What was special about Shaunessy's case?

So I met Shaunessy prior to surgery, and she was most notable because she had a rugby injury when she was in college and had a deformity on the bridge of her nose that she really didn't like, and also she had some breathing issues that she wanted to get taken care of at the same time. And also, she had a very fun and engaging spirit and was really excited to have the surgery performed.

Shaunessy: Why did you choose Dr. Gross?

As I was searching for doctors, just laying around at night on my phone, doing a Google search, I just decided to put in "best rhinoplasty surgeons in Orlando," and his name came up repeatedly. Every other name was Dr. Gross. It was amazing. So I clicked on his website, looked at things. It was a very impressive website. It seemed like he had a lot to offer. I called and made a consultation. The consultation was perfect. He was very comforting, very knowledgeable. He showed me about the computer imaging. I was excited the atmosphere there was very clean, very organized. The staff was extremely friendly. I felt safe. I felt it would be a great place to go. They had a spa that was there and a lot of other amenities and stuff like that that added to the whole experience.

So when we were doing the computer imaging for Shaunessy, it's very important not to overpromise the final result. When I was able to get her profile view on the screen and show her the removal of the bump that she had that she didn't like, and it was a nice, smooth, even plane – but more importantly, she wanted to look very natural – and we definitely achieved that with her. And then we were able to send those pictures home with her via email so she could see the anticipated before-and-after result, which we came very close to. And if you ask Shaunessy, she'll tell you we actually exceeded it, and that really is a great reward for us.

Shaunessy: How did the computer imaging go?

Well, during the consultation, Dr. Gross came in and he was very relaxed. He took a picture of me, put it up on the computer, and showed me what he was going to do. I asked him if he knew what I wanted, and it was amazing. What he put on the computer – it was what I had dreamed of my whole life, ever since this injury happened 20 years ago. It was amazing. He knew what I wanted without me telling him. And when I saw that, and he told me that the results that he could do would be pretty close to that, I felt, "I've got to give this guy a go."

When I went in in the morning on the day of surgery, I had my sister come in from San Francisco to help me out, and they accommodated her while I was in surgery, allowing her to get a massage and hang out at the spa, which I thought was really, really neat. But I went in, they put me under, I went to sleep for a little bit, and Dr. Gross did his thing. When I woke up, I do not recall having too much pain, you know, being a little bit out of it. But while he was in there, we didn't know, but my nose needed some cartilage to build up, and he had to do what he had to do, and he ended up taking cartilage from my ear and leaving like 15 stitches behind my ear to do it. He tackled the task, and he did it effectively, and he made the outcome perfect.

Dr. Gross: How did the surgery go?

So in Shaunessy's particular case, since she had the rugby injury, we needed to be prepared to do reconstructive work to correct her bridge deformity, and in particular, we had to use ear cartilage for her, and that's always a safe bet when patients have deformity and damage to the bridge of the nose. So I was able to use some of the ear cartilage from an incision that was totally hidden behind her ear. There's no visible scar. And then at the end of the procedure, we were able to make her nose look perfect, and then in the recovery area, we explained how we did that, and Shaunessy was really quite excited, and she's really happy with the final result.

Shaunessy: Did you feel pain during recovery?

The pain level wasn't too bad at all. I mean, I didn't really feel much at all. Maybe the second day, I had a little soreness, but it wasn't anything big. By day 3, I was running around the house, doing whatever, like nothing had happened and didn't need painkillers or anything like that. Ibuprofen was fine. By the end of the week, I was ready to go.

Shaunessy: How do you feel about your results?

After the first week, my nose still had some swelling, obviously, from the surgery, and they were saying it was going to go down. Dr. Gross assured me. And I guess maybe the first 3 weeks is when I really noticed the swelling, but it wasn't anything that anybody else noticed. I was something that I noticed when I went out. Probably by 3 weeks into it, I would say, my nose looked as normal as I thought it needed to look. They assured me, though, in a year, the results would really be seen – the final results – but after the third week, I thought it was good enough right there. So to know that it was going to get better was kind of an exciting thing.

Shaunessy: How would you describe your experience with Primera?

Looking back on the whole experience at Primera and Dr. Gross and all of the staff there, I was extremely happy with everything. The staff was extremely helpful, extremely kind. Just very, very nice people – caring, giving, generous. And it seemed real. It seemed like they were heartfelt about everything. Dr. Gross has amazing bedside manner. He is just an amazing person. He's very, very, very kind. He sits down with you, he talks to you, he seems concerned. He gives you time; it's not in and out. He's a genuine, genuine soul, and I think he was born to be a surgeon.

Due to the hurricane, we will be closed Wed 9/28 – Friday 9/30. Please call (407) 333-3040 with any questions or 911 if an emergency. All appointments for these days are being rescheduled by our staff. We apologize for any inconvenience and wish everyone safety through the days ahead.