For some people who get cosmetic surgery, it’s a glance in the mirror that spurs them to act. For others, it’s a friend or co-worker’s comment. For Crista, it was sitting across the breakfast table from her father and uncle during a weekend visit. Genetics are tough to ignore. “I’m realizing that this was just not going to go away and needed to do something about it,” she says. She ended up having Dr. Gross perform fat grafting, a neck lift, and blepharoplasty (eyelid surgery) at his Orlando plastic surgery practice. 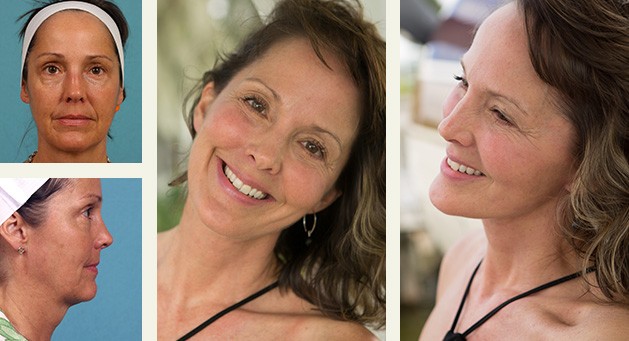 The same morning, I went to my computer and started to search for Orlando cosmetic plastic surgery practices, and one of the first things that pops up was wedofaces.com, which by the way is a great website and was one of the best things about choosing Dr. Gross. And so I looked at the website and I thought about it - I received his education, which was fantastic, and his patient reviews, which were even better than fantastic. And I thought, let's do a consultation with this person, and that's where it really started, because I've been to plastic surgery offices before, and let me tell you, they're plastic. And Dr. Gross' office is as far from plastic as you can get. It's warm and comfortable and inviting, and everybody you meet there is just genuine, and it can't honestly be an act because they're so genuine. And they - from the second visit on, everybody knew me by my first name. I would walk in, it was like I was walking into the Cheers bar and I had my own seat or something. I mean they say, "Crista, how are you? Come in, you look great. What are you doing? What cute boots you have on!" And it would just go on and on, and so I knew from the moment I walked into this facility that I had made the right decision. Meeting Dr. Gross was just the icing on the cake. He's warm and he's gentle and he's into touch. You get so many surgeons who would disassociate from their patients and don't treat you like a human, and I'm not important, I'm not rich, I'm not a socialite, I'm not a VIP, and yet he made me feel like my face was the most important face he was going to do that year. And I felt that way through the entire process, and now I think I'm a VIP and I'm rich and I'm famous and a celebrity. But anyway, choosing him is easy - the website's great, the consultation is great, the computer imaging is great.

What was your first impression?

So I arrived at the facility, which is beautiful. The whole building and everything is self-contained. You're never in public view. If you're going in for surgery or coming out, it's great. And the ladies at the check-in desk are wonderful, the feeling is wonderful there, wonderful iTunes things playing, and then you spend a little time with a nurse talking about what you're interested in and your scan, and the fact you're a sinner and you lay the sun and you must be beaten, but they'll take care of you anyway, and then you finally meet Dr. G., who is just wonderful. He's very hands-on and very sweet and very thorough. When he speaks to you about what are you going to have done, he doesn't act like he can't understand it. He gives you details and tells you where the sutures will be and shows you previous patients who've had the same things. And one of the coolest things about this practice is that once you decide upon your surgery they give you a list of former patients who've had the same surgery and welcome you to call them. And there's nothing better than a list of 20 names of people who're going to rave about him, how can you turn that down. It's just the best sort of user review you can get. I chose him based on the website, but going to the consultation made it that much better. I would do it again in a second.

Dr. Gross is so very good about explaining exactly what the procedure will be and where your sutures will be and what you should expect upon recovery. And what I expected was Audrey Hepburn instead of the neck of a turkey, and I got that! I mean all of my life I had basically a straight line from my chin to my collar bone, and that was just getting worse. Now look! I mean, isn't it beautiful? I have the best neck ever, thanks to Dr. Gross. The bleph is here - half under the eyes - and I have little sutures here, which you can't even see anymore, and the tiniest little suture there, which you can't see anymore. And he had suggested during the consultation that I was a good candidate for side grafting here along the marionette lines and I understood that, and yes, I could use that improvement, but I just didn't know if I was ready for that or not, and so I declined, and what was the other 2 things? And then when I woke up I had these amazing 2 features right here and I said, what was that all about? He said, "Well, you have too much fat in your neck, and things just worked out so well that I just went ahead and did it." ... He did and it was the best part of my surgery, I mean it just lifted my entire face. I look 10, maybe 20 years younger, and it was a wonderful thing for him to do during the surgery. I mean look, don't I look fabulous? Look, I've got a neck - see this neck? I can wear turtlenecks now! I look fantastic - thanks to Dr. Gross.

OK. Recovery timeline, this is the part I was most worried about. It's strange, but I was not at all worried about the procedure or being under general anesthesia or what the sutures might look like. I was incredibly stressed that I was going to miss 2 weeks of exercise, because I really like my daily workout, and you're not allowed to do that for 2 weeks. And I thought, "I'm 49. Things are going to move south rapidly," but ... I started kind of doing some exercise a little under the 2 weeks, not anything strenuous ... And I had to tell you, the recovery was so much easier than I was afraid it was going to be. There was never any pain that required the pain meds. It was sort of an Ibuprofen, I have a bad headache sort of thing - there were no serious aches. The only time I took the painkillers that they prescribed were for sleeping, so that it didn't hurt either ear if I happen to sleep on my side, which I did, and other than that the pain pills weren't needed at all. The recovery was amazingly easy. I had completely overprepared and made like 4 tubs of soup because I thought I wouldn't be able to chew anything, and that lasted about 2 days, and, in fact, the hamburgers and everything ... And it was just so much easier than they even tell it's going to be. The recovery was nothing - it was a snap, and still I'm not yet at 3 months. I'm 2 weeks short of 3 months, so very short recovery time, and yet all the sutures, the scars have faded so much that you can't even tell where they are. Tiny sort of bumps in places, and I was maybe a week and a half in the house before I decided to brave public, which I did, and nobody screamed running from the stores, so I figured that was a good thing. And since then, I've been out in public maybe a little bit of cover-up on some of the sutures, but nothing unusual that stops me from having a normal life, 2 weeks after the surgery.

As for as the reaction from friends and family, I'll have to give you an update because I'm going home to Denver next week, and that's when I'll really get reactions from people who didn't know that I was having the surgery. But the hardest critic would have been my mom, who wasn't completely in agreement with me having this surgery, because when I flew home for her birthday and she met at the airport and said, you look wonderful and hearing her say that was just the best reaction I could have had. She is completely amazed and loves the result, and even though she created me, she knows that Dr. G. made me better than she made me in the first place, and I thank him for that and for her happiness because we're both really happy right now.